Are You Up To The Challenge? 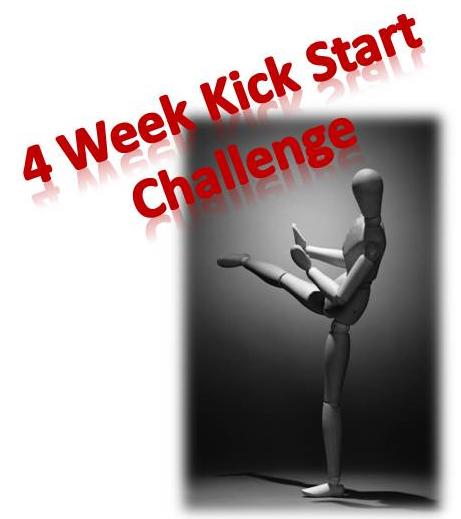 This week I launched a 4 Week Kick Start (4WKS) Challenge as part of a weekly radio segment I do with Niki Springett on Northside Broadcasting 99.3FM.

The idea of the challenge is to inspire the listeners of the show to stop wishing, thinking, planning, resolving and to start taking action to make change happen. If you’re sick of breaking commitments to yourself (and others around you) then you might like to join the challenge too.

Each week, for 4 weeks, I’ll share an activity that you can do to kick start change. This will require you to do some thinking and if you’re keen, spend some time each week completing a task.

Each task is designed to move you toward a better life by giving you self-insight and personal growth in areas that are currently holding you back. The activities are practical and not all “woo woo, fluffy, daily affirmation” things (not that there’s anything wrong with that, it’s just not my style).

The topic for Week 1 is “Stop Putting Up With and Start Getting What You Want”.

The reason for starting with this topic is because all of us put up with stuff. It’s usually a combination of small stuff and big stuff. Here’s some examples directly from my clients:

The thing is, over time these items build up and bring us down and we either explode about something apparently trivial or we end up feeling frustrated, angry or disappointed with ourselves and others.

So, the first activity in the Challenge is to make a list of all of the things you are putting up with. These are called Tolerations.

Take a piece of paper and just start making a list all of the things that you are putting up with. Start writing things down – no matter how trivial they seem. Add to your list as more things come up for you. Keep your worksheet close by your bedside as you try to fall asleep at night because that’s often when we stew about the things that are annoying us.

Decide which items on your list you will no longer tolerate. For each one think about the changes you will make. That might include asking others to do things for you, letting go of duties or responsibilities, getting qualified or skilled or just deciding to do something that you want to do with no regard for what others may think.

What I want to share with you in this post is a true story of how putting up with things stops us from getting what we want.

A client, I’ll call her Jenny, came to me for coaching because she was very unhappy in her job. She was in a senior role in a large organisation and had a very successful career. She earned very good money. Her husband also had a senior role and they worked long hours but managed to build in time for each other and their two school-aged children. They went on good holidays together, had a lovely house in an exclusive suburb and a good social network. All sounds pretty good right? Wrong.

As I coached Jenny over a few sessions, she told me that she’d never really loved her job but was a high-achiever who applied herself and didn’t like to fail. As a result, she’d been promoted and head-hunted to bigger and better roles. It all kind of happened around her and she went with it. Her problem was that she was now dependent on the money to fund her lifestyle, defined herself by her career, felt that her husband liked that she had such a good job and she felt trapped.

No one knew that Jenny felt this way because she kept it all to herself and kept up the facade of a being a successful career woman, wife and mother. As she spoke to me about how she was feeling, she was very emotional. She had been putting up with doing a job she just didn’t like, the expectations of others, her own needs and desires going unmet and inside and was feeling desperately unhappy. When I asked her why she put up with feeling this way and not doing something about it, she said she didn’t want to disappoint anyone. She also felt that she would be a failure if she admitted to feeling like this.

Jenny had made the decision to tolerate being unhappy to apparently please other people and to feed her own self-perception.

Jenny eventually spoke to her husband about how she was feeling, worked out what she wanted to do and a plan for making that happen in a way that she was comfortable with and that didn’t destroy all of the good things she had going. She is still a successful career woman, wife and mother but now she’s also happy.

The reason I wanted to share a real experience is to show you how much and for how long we put up with things and what an impact it has on us.

By taking stock of the things we are tolerating and then taking action to put changes in place to eliminate or reduce these tolerations, we can start to live a better life.

So, if Jenny’s story resonated with you or got you thinking about the things you’re putting up with, then why not join the 4 Week Kick Start Challenge? More details are available on my website.

If you enjoyed this post and think others would benefit from reading it, please use the buttons below to share it.

———————————–
Have you stopped putting up with something that you weren’t happy about?
Do you have a story to share about tolerations?
Are you up for the 4 Week Challenge?

4 Responses to Are You Up To The Challenge?