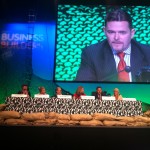 Last week I was lucky enough to attend “Kochie’s Business Builders Bootcamp” gratis thanks to the generosity of my friend Cindy Luken, who was a speaker on a panel session. 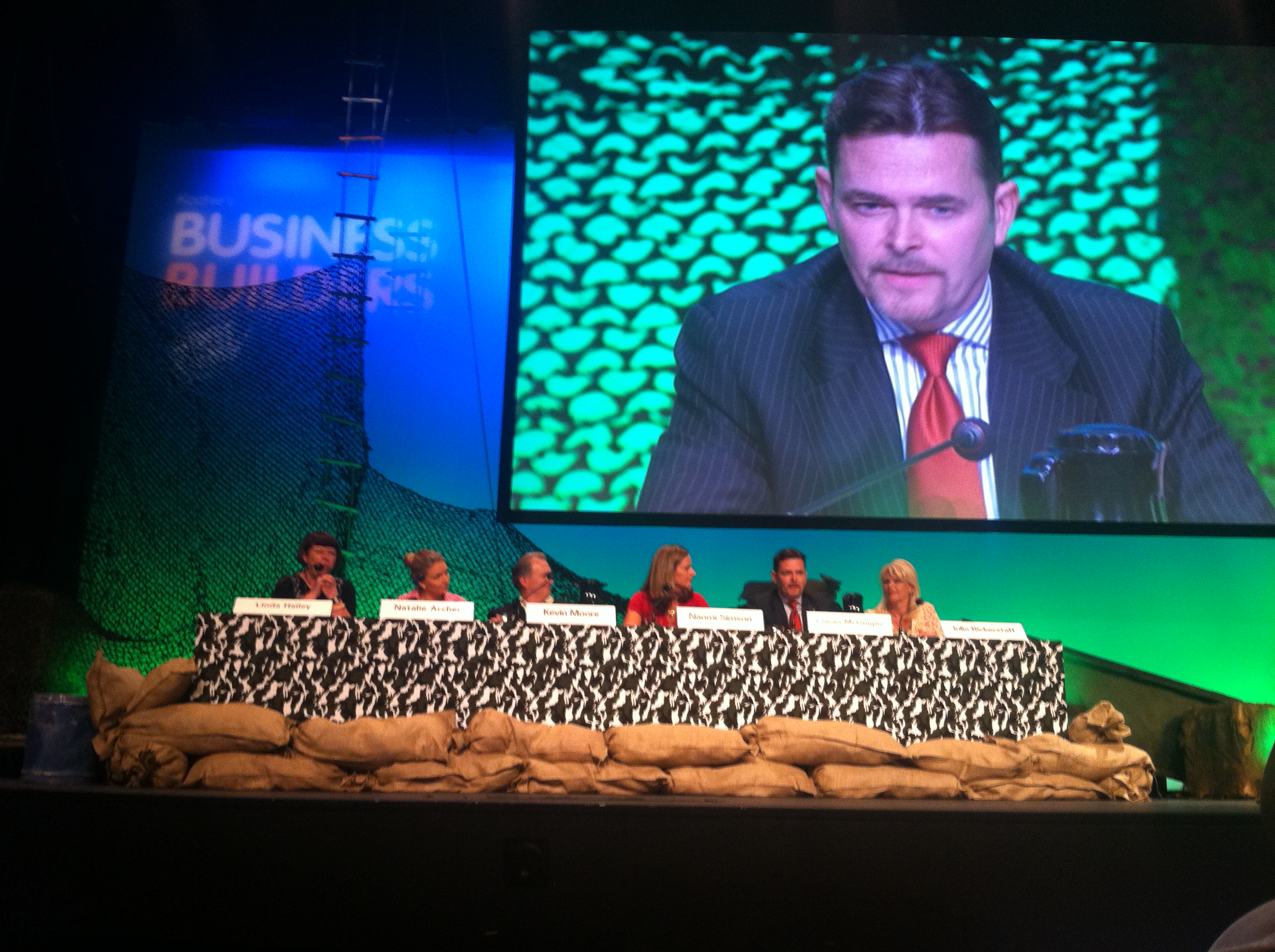 Own photo taken during Bootcamp Debrief

I’d seen the marketing promotions everywhere. If you live in Australia it was hard to miss, and given that I’m about to run my own Bootcamp, I read through the program with interest. The line-up of speakers was impressive – Mark Bouris, Suzi Dafnis, Julia Bickerstaff, Naomi Simson, Camilla Franks and of course David Koch, to name (drop) just a few that caught my eye.

To be totally honest, even though it’s embarrassing to admit, I was envious and disheartened. David Koch, a well-known media personality was running a Business Bootcamp just one month ahead of mine. How could I possibly compete with him? All that marketing budget and media power. The great line-up of speakers. Even the name – Business Bootcamp! I was feeling despondent and ready to give up on my own plans.

I consoled myself by brushing the event off as an just another conference, like so many others with lots of interesting people talking, sharing their own experience, promoting their own companies with a few networking opportunities thrown in.

Until I was offered a ticket! For free! How could I not go and check out the competition 😉

In a nutshell, the event was inspiring. Many of the speakers were impressive, some surprisingly so. Justin Herald, Rachel Botsman (girl-crush alert) and Sebastien Eckersley-Maslin were the standouts for me. Justin because I liked his sarcastic wit coupled with his “find a way to make it happen” attitude. Rachel, Social Innovator (I wish I knew about that job when I was deciding on a career path) who was smart, savvy and truly enthusiastic (& 7mths pregnant BTW). Sebastien because he talked a lot of sense and he is involved with Club Kidpreneur.

I’m sure you followed the Twitter #kbbevents stream or knew someone who attended or have read about what the presenters spoke about, so I don’t intend covering that ground here – although more than happy to share with you if you’re interested – just ask 😉

It’s Good to Press the Flesh

As a solo business owner, I spend a lot of my day talking to myself or my computer. Sure, I’m online so I interact with community on Facebook, LinkedIn & Twitter and with my clients via my online programs but mostly, it’s just me and the screen. At the Bootcamp, I really enjoyed being in a physical room, with people physically present. I’m an extrovert, so I get my energy from interacting with others and at the end of the two days, I felt re-energised and had met some great people – including Jen Brown from Sparta Personal Training who I’d only ever known “virtually”.

Even with all that marketing spend and media power, I don’t think the conference was at capacity. I’m not sure how many they expected but I think there were around 700 people in total. I’m also not sure how many people like me, were there for free but I didn’t meet a single person who paid. I’m absolutely not bagging out the promoters, so please don’t send hate mail! I do want to share how hard it is to get the message out to the right community and get that community to part with their dollars, even for a much publicised event. It’s tough. It takes perseverance and creativity – especially if marketing funds are limited. The other thing I realised is, that sometimes you might choose to give a bit away to create the buzz.

You Never Know Who You Might Meet at Lunch

I mentioned Club Kidpreneur earlier. When I heard Sebastien mention it, I took a note to find out more because I wanted to find out whether I could get involved and I thought it might be good for my young son. I figured I’d track it down post-event and see what I could find out. During the next break, I was introduced to a guy by someone else I’d just met and as it turned out the guy, Eamon was a Director of Club Kidpreneur which is about “building a community of passionate business owners / mentors willing to inspire and teach Australia’s next generation of kids to be more entrepreneurial.” How’s that for serendipity!

Technology is the Biz

I took my iPad (no, not iPad2 sadly) and I used it to take notes, send tweets, record some of the sessions and bookmark recommended websites and resources as the speakers mentioned them. HP were a sponsor and emailed out Top Daily Tips each day and were promoting the benefits of their ePrint technology. Many of the speakers were tweeting live and during each session, delegates could participate in live polling on the topics, ask questions & comment via SMS / Twitter – all of which were displayed on the big screen and which made for some funny moments (e.g. Lauren Brown, are you single? I’m 6’2″, funny and handsome!). I love technology and enjoyed watching it being employed for fun and productive use. 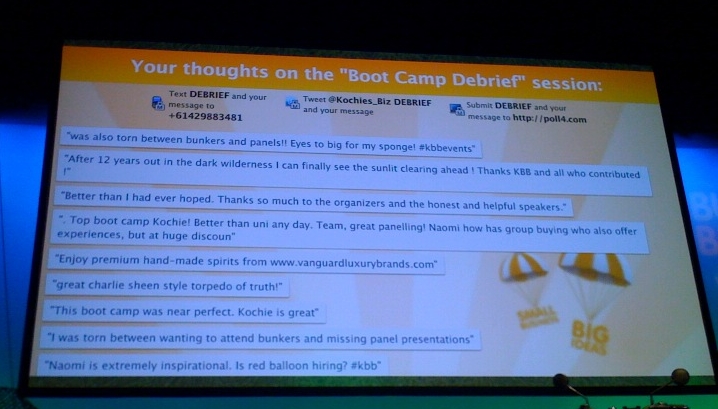 Women Are Doin’ It For Themselves

It was fantastic to see so many women, not only speakers but also delegates. In corporate world, I attended my fair share of conferences and on the most part, the majority of presenters were men and the majority of delegates were men. At the Bootcamp, there were smart, sassy, savvy women happily sharing ideas and lessons. It was refreshing. I did wonder whether women are so fed up with the glass ceiling, inequality and inflexibility of corporate land that we’re just taking matters into our own hands and running our own businesses the way we want instead.

Ideas are Good but Action is Better

There was plenty of good advice and information shared throughout the 2 days. Unfortunately I didn’t get the chance to participate in a Business Bunker – a breakout group of 10-15 participants but heard they were great. I got lots of ideas and we were urged by many speakers to take action with what we were learning. We were even told that we could email our “one action item” to Kochie’s team and they will send out a reminder to us to make sure we implement. I’ve already executed on a couple of ideas (Club Kidpreneur, website analysis, marketing plan) and built others into my plans.

I Know I Can Do It

I’m more motivated than ever to promote and run my Bootcamp. Instead of feeling like no one will be interested in what I’ve got to say, I now know that’s just not true. There were so many questions from people wanting to know how to put the ideas into action. We all know the information is out there and we all know that a lot of it will be available free of charge but we are busy and we want it now. The Business Bunker sessions were full because people wanted the personal attention where their own specific issues could be addressed. I know I have a great product. I know there is a market for it. I know my Bootcamp will be intimate and practical and I know that anyone lucky enough to be part of it will have a kick start on their journey to entrepreneurship.

As Michelle Gamble from Marketing Angels told us, business owners need to be “fearless, focused, relentless and consistent”.

Did you attend Kochie’s Business Builders Bootcamp? What did you like best?
Have you ever seen competitors doing something similar to you and lost self-confidence?
What ideas are you putting into action this week?

Entrepreneurship. All It’s Cracked Up To Be?
Five Keys To Starting Your Own Business – Key #1